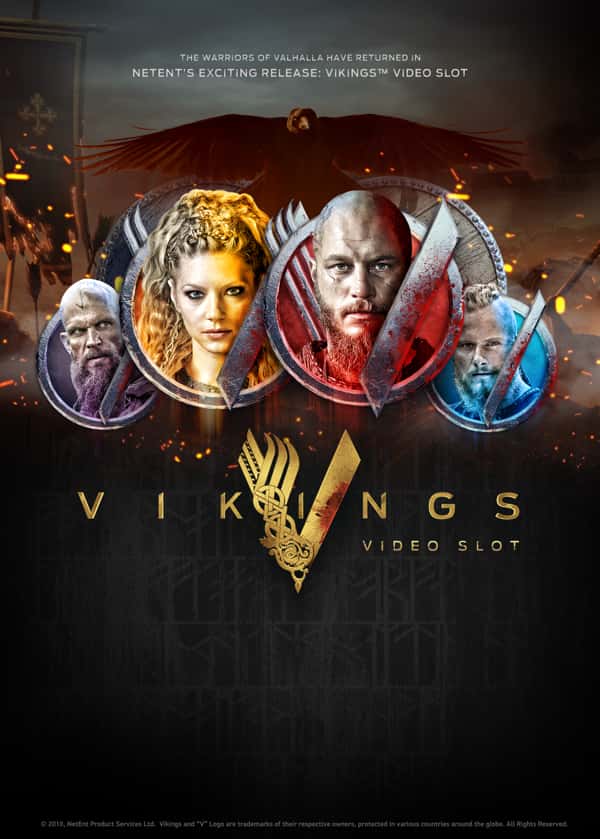 If you like the action-adventure TV series Vikings, you’ll love the Vikings video slot game from NetEnt. Based on the popular show, in this 5 to 7 reel, 243 ways to 78,125 ways to win slot, you’ll team up with Ragnar Lothbrok, Lagertha, Bjorn, and Floki in epic battles to protect what is yours and to raid for more

Vikings is filled to the brim with exciting features, offering plenty of winning chances. Among these include a Hotspot feature, a Shield Wall feature, and a Raid Spins feature. This last feature triggers 7 Raid Spins on a 7 reel, 78,125 ways to win reel set with 3 Hotspots, giving you up to 27 Viking symbols for payouts of up to 10,000x your stake on each and every free raid spin!

Visually, the Vikings slot has rich graphics and animations with images and symbols that will remind you of the TV series. Of all the symbols on the reels, the “V” symbol is the most rewarding and will payout 7x your stake if you manage to land 7 across a payline.

What truly makes this video slot exciting, however, are its special features, starting with its Hotspot feature. This is activated when a fully stacked Viking character symbol (e.g Ragnar, Floki, etc.) lands fully in a Hotspot on reel 3. All other Viking character symbols on the reels will transform into this symbol. Wins during this feature can result in a scatter-style payout, which means you’ll get a win for only 3 symbols all the way up to 27, with a top reward of 243x your total stake.

Next up is the Shield Wall feature. This feature can be activated in both the base game and the Rapid Spins feature. The Shield Wall appears as a cluster of mystery symbols in a random spot on the reels, transforming the symbols on these reels into randomly chosen ones, increasing winning chances.

Once triggered, the feature awards you with 7 raid spins with 3 Hotspots on reels 3, 4 and 5. If you’re lucky enough to land a fully stacked Viking character symbol in 1 or more of the Hotspots, all other Viking symbols inside and outside the Hotspots transform into the same character symbol, allowing for huge wins of up to 10,000x your stake on every raid spin!

Ready to raid for your riches?