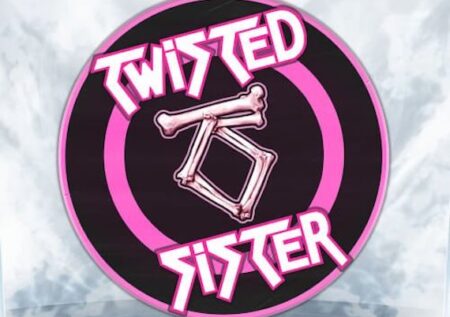 Twisted Sister is here, and they’re taking over! One of rock’s most influential bands is bringing their own brand of rebellion to the reels in a remarkable new music slot from Play ’n’ GO.

Led by the enigmatic Dee Snider, Twisted Sister was formed in 1972, going on to revolutionise mainstream rock throughout the 80s, using their high energy and entertaining music videos to stamp themselves into the public consciousness.

The game is a 6×6 cascading gridslot based around two of the band’s most iconic tracks, I Wanna Rock, and We’re Not Gonna Take It. This slot and its design perfectly capture the unique style and essence of the band in their most popular era.

All the gang are present as symbols on the reels Dee Snider, Jay Jay French, Eddie “Fingers” Ojeda, Mark “The Animal” Mendoza and Anthony “A. J.” Pero, along with some cool band merch; an LP, a pick, a badge and a record sleeve.

The game has not one but TWO Wild symbols, a stylised standard Wild and a Wild Scatter in the form of Angry Dad, the character played by actor Mark Metcalf in their videos and a symbol of the establishment they were rebelling against.

The Standard Wild will substitute for any symbol (except the Wild Scatter) to help create winning combinations along the game’s paylines. At the same time, the Wild Scatter not only substitutes for any other symbol but can also be collected to trigger the We’re Not Gonna Take It bonus feature!

There is also a huge 2×2 Mega Symbol that becomes active during We’re Not Gonna Take It and will create winning combinations alongside any of the band members.

The game also has multiple band features which activate when you power up the charge meter. The meter is charged by any winning band member symbols that land on the reels during a spin. For every five symbols, a charge feature activates at the end of your spin, features occur randomly one by one. For each feature, a band member is randomly chosen as the symbol to trigger the features; if there are no band members on the grid, one of the other symbols will substitute. The features are:

The chosen band member will release a powerful soundwave that will destroy any band merch symbols around it which will be replaced by more cascading symbols, giving you the chance to create new combinations.

All band members on the grid transform into the same symbol.

2 Wild Scatters are added to the grid on a non-winning spin.

We’re Not Gonna Take It

As the Mega Symbol smashes across the reels, new symbols will cascade onto the grid in their place giving you new combinations and the chance for more wins; the mode ends when all Wild Scatters have disappeared, and there are no more wins on the reels created by new symbols appearing.

Band features are also still active during your free round, giving you even more wins on the reels!

Grab your guitar and join Twisted Sister in an epic slot experience!