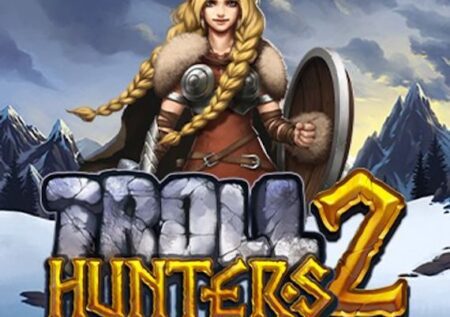 The Troll Hunters are back!

Troll Hunters 2 the hunt is on! The Troll Hunters from Play ‘n’ Go are back once again, trying to protect their village against the menacing troll that has plagued them for aeons!

Join the raven-haired Ylva, stoutly warrior Borghild, and the fearsome Astrid as these fearsome women set out to protect their village in this stirring new slot.

Match 3 or more symbols horizontally or vertically to get a base game win. LP symbols must match identically but Ylva, Borghild and Astrid, as the HP symbols, can team up in any combination of three or more to give you a win.

The game also has a Drop Multiplier to load your wins up, even more, each round! For every set of wins you get during a round, the multiplier will increase by one. So, the first set of wins will get a x1 multiplier; the second set will have a x2 multiplier and so on. Once there are no more wins, and a new round starts the Drop Multiplier resets, and you go again!

There are three different types of Wilds within the game to aid you in your troll fighting adventure. The first of these is the standard Wild, represented by the symbol of Odin. Any time three symbols create a winning line, they will be removed from the grid, and the standard Wild will appear where the middle symbol once was.

The second type of Wilds are the Multiplier Wilds, represented by the x2 and x3 symbols. During gameplay one of the Troll Hunters will be beside the reel waiting to help you out. On the opposite side is a charging meter which can be filled by creating winning lines using HP symbols. Wins of 3, 4 or 5 symbols will fill 1, 2 or 3 sections of the meter respectively, before being reset in the next round.

The third and final Wild is the Troll Wild, which is unleashed during the Win Spin feature as part of the game’s bonus feature, here’s how it works:

During each game round, one of the top three rows is chosen to be the BONUS row. If all symbols are cleared from that row, you’ll trigger the bonus feature. At the start of the feature, you must choose one of the troll hunters to help you; each one will give you a different number of free spins and their own Wild for the round.

During the Free Spins, the charge meter will switch from giving you Multiplier Wilds to giving you free Win Spins (which are independent of the number of Free Spins a player chooses). Once you win a Win Spin, it will be activated at the end of your current free spin round.

You can trigger another Win Spin during a Win Spin by filling the charge meter once again, and another Troll Wild will be placed on the grid, once your new spin starts.

If a Win Spin is re-triggered, the Drop Multiplier from the previous Win Spin will not reset when the new spin starts but will carry on into the new Win Spin round.