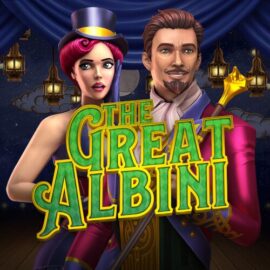 First Deposit/Welcome Bonus can only be claimed once every 72 hours across all Casinos. Bonus Policy applies.
by Foxium

You’re in for a real treat with the Great Albini and his beautiful assistant Lily. Be dazzled by Mystery Box Re-spins and a Magical Bonus Box feature.

Magic, illusions and the extraordinary abound in the exciting magician-themed slot, The Great Albini. You’re in for a real treat with the Great Albini and his beautiful assistant Lily, who are ready and waiting to dazzle you with Mystery Box Re-spins, Stacked Sticky Aztec Lady Wilds and a Magical Bonus Box feature. If you manage to see through the tricks of this magic show, you could take home some big wins of up to 4,000x your initial stake.

With 5-reels and 25-paylines, The Great Albini is a game that is all about the thrills and putting on a good show. The backdrop for the reels is a heavily draped theatre stage and on one side of the reels stands the Great Albini, and on the other side stand his assistant, Lily.

On the reels themselves, you’ll see that the high paying symbols include those that are often associated with magic shows, such as a bird and a knife target. That said, it is the Great Albini, himself, who is the highest paying symbol, and appears stacked at all times. The game is also equipped with a wild symbol and two scatter symbols: mystery boxes and bonus boxes.

The game’s most spellbinding acts include its Mystery Box and Bonus Box features. If you manage to hit mystery boxes in a full stack on three reels, this will activate the Mystery Box feature. You will be awarded with three re-spins and the mystery boxes will be locked in place. Any additional boxes that land on the reels in a re-spin will also be locked in place and the counter will be reset to three.  This will continue until all positions are covered in mystery boxes or no further boxes land on three re-spins.

As for the Bonus Box feature, this will be triggered if you land bonuses boxes on reels 2, 3 and 4. This will award you with 12 free spins. What’s more, the game window will expand to a 5×6 layout, boosting the number of fixed paylines to 50.  Additionally, Lily will transform into a stacked Aztec Lady Wild. If this symbol should appear during the free spins round, it will lock the symbol in place and award 1 re-spin with a 2x win multiplier. It is during this bonus feature that you have the chance to score the game’s maximum win of 4,000x your bet.

Think you’ve got what it takes to score some magical wins?