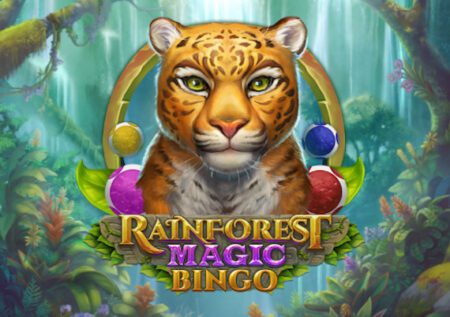 Step into the colourful world of nature with the new Play’n GO title, Rainforest Magic Bingo.

Inspired by their Rainforest Magic slot game, Rainforest Magic Bingo is packed with great features like extra balls, a progressive jackpot and two bonus features with an instant mystery prize or the chance to pick prize; there’s lots of fun to be had!

In the game, you can play up to four cards at once, each one containing 15 numbers between 1 and 90. Thirty balls between are drawn from a total of 90, and if any of them match your numbers, they’ll be marked off creating patterns on your cards. The prizes you win are based on the patterns they create.

After the initial balls have been released, there may also be a chance for you to purchase up to 13 extra balls to help chalk off more numbers and create better patterns for bigger prizes!

One of the highest paying patterns will award you an instant mystery prize when created on your card!

The Bonus feature is a pick and click feature where you have to choose to see what’s behind the magic stones; you start with five initial picks.

If all four of your cards are in play, with at least the minimum amount staked on each, then you could unlock the treasure slate! All you have to do is achieve the BINGO pattern on one of the cards, and the chest is yours!