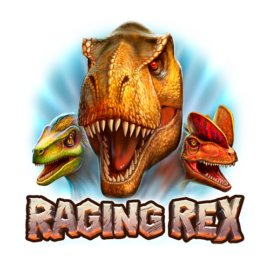 First Deposit/Welcome Bonus can only be claimed once every 72 hours across all Casinos. Bonus Policy applies.
by Play 'n' Go

Ken Says: Step back in time to a world that was once ruled by dinosaurs with Play’n GO’s exciting Raging Rex game! 6 reels and a whopping 4,096 ways to win!

Raging Rex. Journey to a time before man!

Step back in time to a world that was once ruled by dinosaurs with Play’n GO’s exciting Ranging Rex game! 6 reels and a whopping 4,096 ways to win! This video slot thrills with wilds and multipliers as well as a Rampage feature. It’s also possible to win unlimited free spins with the Raging Spins feature.

You’ll find yourself in a dense forest with symbols on the reels that include 6 fossilised insects and arachnids. There are also dinosaur symbols, of course, including velociraptors, triceratops, dilophosaurus, parasaurolophus, and the T-Rex, the latter of which is the star of the show and the wild symbol.

Being the star of the show, the T-Rex is also your ticket to unlocking some of Raging Rex’s cool features. For instance, if the Raging Rex wild symbol lands fully on any reels, the Rampage feature will activate. The Ranging Rex wild reel will move to reel 1 and will award you with 2 re-spins. From there, the wild reel will shift 1 reel right with every re-spin.

That said, the main thrills of this game occurs when you trigger the Raging Spins feature. This is played when 3, 4, 5 or 6 meteor scatters appear. You will receive 5x your stake, plus 8, 15, 20 or 30 free pins respectively. If you land a minimum of 2 scatters during the free spins round, you will trigger more free spins, and there is no limit to the number of free spins you can get!

What’s more, once you’ve triggered the Raging Spins feature, you will also be provided with a choice of either the Wild Hunt feature or the Primal Rage feature. In the Wild Hunt feature, extra Rex Wilds will show up and will be accompanied by 2x or 3x multipliers. This can combine to multipliers up to 243x! On the other hand, should you opt for the Primal Rage feature, stacks of wilds will appear on reels 2  to 6 on each spin and will walk to a new reel with each spin.

There are plenty of ways to score big wins with Raging Rex, including a maximum jackpot of 5,000x your stake in the free spin feature.