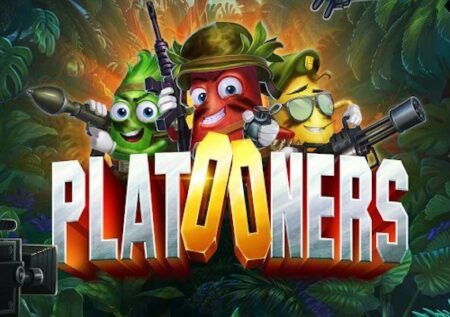 The air vibrates of expectations. The studio is prepared with backdrops, lights, cameras and microphones. Everyone is excited and eager to get started with the production of the new action movie, especially the stars of the show who stumble and fumble around. All three recruits are armed with impressive rockets, heavy machine guns and grenades, all in order to battle and hopefully defeat the gold-filled snakes. All parts of the snake, from the tiniest coin to the big head, glare and shine in the light of the cameras, but what is hidden in the snake’s treasures?

The three Platooners are impossible to control, but as always eager to please. It is entertaining to see how they fire their rockets, machine guns and throw grenades resulting in respins, additional wilds and paylines of 5 of a kind in the base game. It works as test shots of the real action scene production taking place in the bonus game. All Snakes of Fortune are fully loaded with coins wins and mysterious bonus coins which reveal bigger wins, additional ammunition, increased attack power or even bombs at the time of explosion. Defeating one snake intensifies the action even further as the Platooners’ weapon become more powerful and they are challenged with an even stronger snake, which is also considerably more valuable and awarding.

Platooners is an action-filled 5 reel slot designed for Mobile First. It brings the familiar Bloopers back to action in an appealing Hollywood setting. Respin features are combined with an innovative and very rewarding bonus game. Connecting paylines generate up to 178 ways to win the sought after 250,000 coins.