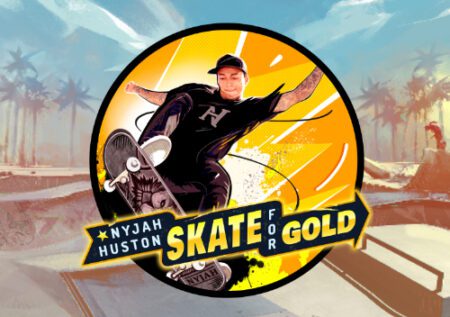 Grind your way to the gold!

Grind your way to the top with this ‘trucky’ new slot from Play’n GO, Nyjah Huston – Skate For Gold

Nyjah Huston – Skate for Gold is based around World Champion skateboarder Nyjah Huston, one of the most influential athletes ever to pick up a board. The game features two fun features based on his skill with a board.

Nyjah the picture symbols in this game, one picture of the champ himself, and four ‘trick’ symbols, acton shots of him performing tricks on his board. The rest of the symbols are the graffitied letters S K A T and E.

The Wild is a stylised symbol that can expand into a skateboard and cover a whole reel; it may even turn into a golden Wildboard that includes a multiplier up to x10!

The symbols can unlock two fantastic features on the grid, and these are Wildboard and SKATE.

Wildboard can be triggered at random while you play the base game. One of Nyjah’s trick symbols will be chosen and, if it lands on the reels, Nyjah himself will ride across the reels leaving Wilds in his path. One of these Wilds will expand into a Wildboard, and may even transform into a golden Wildbord giving you up to 10x multiplier on any wins it creates.

During SKATE, Nyjah will have to pull off the perfect combo by performing three tricks in the correct order. If he succeeds, he will unlock the Wildboard feature. Unlocking Wildbord during free spins will also grant you to extra free spins!

Easter Island 2
WELCOME OFFER: 100 FREE Spins
SPIN ME
T&Cs Apply
First-time depositors only
Min. deposit: £10, Game: Thor and the Trials of Asgard, Spin Value: £0.10., Max Free Spins: 100. WR 60x free spin winnings amount (only Slots count) within 30 days. Max bet is 10% (min £0.10) of the free spin winnings amount or £5 (lowest amount applies). Spins must be used and/or Bonus must be claimed before using deposited funds. Deposit/Welcome Bonus can only be claimed once every 72 hours across all Casinos. Bonus Policy applies

Labyrinth of Knossos
SPIN ME